"Hispanic/Latino" includes multiple populations from various Latin or Spanish descents such as Mexican, Cuban, Puerto Rican, and Spanish.1 Cultural and health differences among these groups are often lost as collected data is frequently combined under the category of "Hispanic/Latino" to ensure valid data sets (e.g., large sample sizes). However, some national surveys capture the variety among the subpopulations. A data set from 2010-2013 shows the Puerto Rican smoking rate at 29% compared to other Hispanic Latino subpopulations (19%-20%).1 Many smoking behaviors are tied to cultural roots, which are varied among subpopulations with their own individual histories involving tobacco use.2 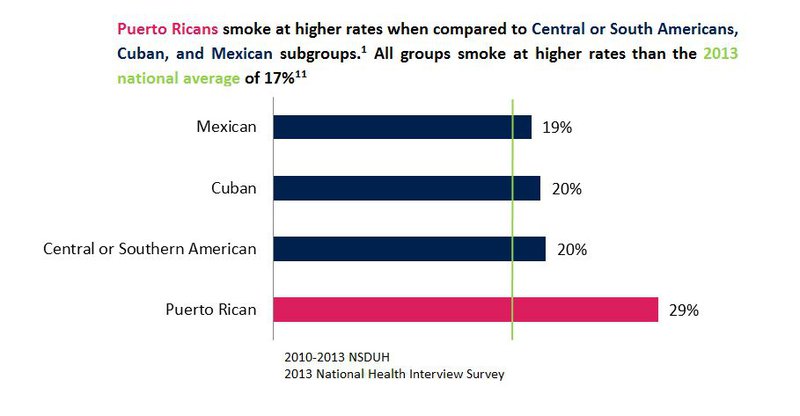 Unfortunately, Wisconsin data collection has not been able to get valid estimates of annual tobacco use rates for the Hispanic/Latino populations. The combined 2011-2015 Behavioral Risk Factor Survey (BRFS) highlights that Hispanics/Latinos use tobacco (20%) similar to the Wisconsin state average (19%), but at higher rates than Whites (18%) and Asians (14%).3 Even though Hispanic/Latino smoke similarly to overall averages, this population is growing and thus the number of smokers are likely to increase.1

Similar to other minority groups, Hispanic/Latino communities see a disproportionate amount of tobacco advertising. The Hispanic/Latino population is the fastest growing population in the United States and thus, the tobacco industry targets this population for new tobacco users. Strategies to increase smoking within the populations have included large donations to organizations representing Hispanic/Latino groups, and targeted advertisements using Spanish and Hispanic/Latino models, to increase tobacco use among the population.4,5 Despite persistent pro-tobacco marketing being directed to the community, there are very limited cessation programs available for these groups, which decrease quitting opportunities.