Asian populations are often grouped under an "Asian" umbrella term that encompasses many ethnicities. However, subgroups within the Asian population have different risk behaviors, such as tobacco use, and health outcomes in the United States. Combining these subgroups into one population limits the ability to recognize differences and variations within the community. There is limited data in Wisconsin due to small population sizes, so only overall Asian tobacco-related data can be used. Asians in Wisconsin smoke below the state average; however, there are likely variations among subgroups as can be seen through national numbers below.1

Asian populations' usage rates vary by tobacco product. Below is information on cigar, smokeless tobacco, hookah, and cigarette use.1,2 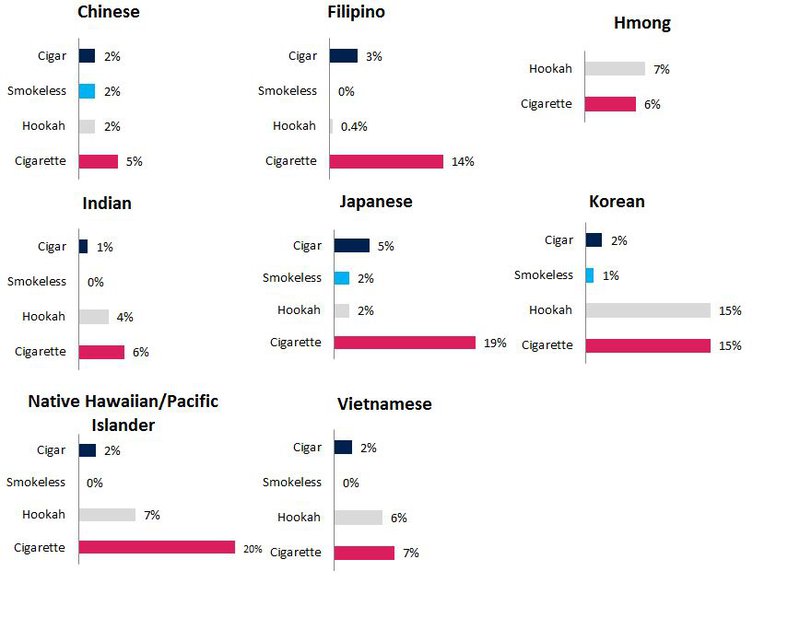 Tobacco use differences have indirectly led to Asian populations being exposed to higher rates of secondhand smoke in the home when compared to the general public. Unfortunately, limited data sources create a wide array of estimated exposure, ranging from 28%-38%.4,5 Particularly among Asian families with less education, indoor smoke-free policies are rarely enforced. This highlights the need to integrate tobacco prevention and intervention education among Asian populations that lack an overall educational background.

Health providers are less likely to refer Asian American populations to tobacco cessation opportunities as providers believe they are unable to support cessation efforts.6 These lack of referrals has played a role in an unequal use of cessation programs (such as quit lines), leading to fewer quit attempts among Asian populations.

Ultimately, exposure to secondhand smoke and lack of cessation resources contribute to lung cancer being the leading cause of cancer death among Asian Americans.4